WPA Meets IUP : A Glimpse Into America's Artistic Past: Home

“Painting and sculpture are very archaic forms. It’s the only thing left in our industrial society where an individual alone can make something with not just his own hands, but brains, imagination, and heart maybe.” 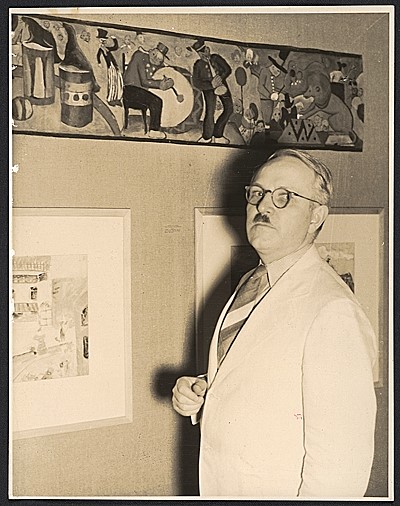 • 1934: A New Deal for Artists from the Smithsonian American Art Museum (SAAM)

Resources from the IUP Library for The Federal Arts Project 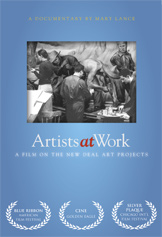 Introduction to the Online Exhibit and Federal Arts Project

This Exhibit presents works by 14 artists in the collection of the University Museum at IUP, and culminates the student project for the Fall 2015 ARHI 481: Special Topics in Art Museums, Art Libraries, and Visual Resources at IUP.  Each student researched two art works: one by a well-known artist and one by a lesser-known artist.  Each wrote a brief biography of the artist, explanatory information about the individual works, and cited a quotation from the artist and music from the time of the work.

The Artists in this exhibition all shared a background working with the Federal Arts Project, a division of the Depression-era Works Progress Administration, although not all of the works date to that period. President Franklin Delano Roosevelt established the WPA in 1935 to provide jobs and help alleviate the desperate economic circumstances in America during the 1930s. That same year, FDR created the FAP, and named the folk art expert and art critic Holger Cahill as its Director.  In addition to helping support artists in many areas, including music, writing, and the visual arts, the FAP intended to bring art to “the people” through public works, exhibitions, and classes.  In its early days, the FAP was open to everyone; later, employment was restricted to U.S. citizens only.  Several of the artists in this exhibition were immigrants, as was Cahill himself, who was born Sveinn Kristjan Bjarnarson in Iceland and immigrated to North Dakota in the 1880s. In an undated lecture, Cahill stated:

By 1933, everyone interested in America art realized that the encouragement of art was too big a task for any private individual or  private agency. Some form of organized public support for our artists had to be found, otherwise American art would be in danger of entering a “dark age” from which it might never recover.

Although the FAP ended in 1943 during World War II, the artists in this exhibition continued working throughout their lives, all achieving at least a degree of success. Some, such as Milton Avery and Philip Guston, even joined their FAP colleagues Jackson Pollock, Lee Krasner, and Willem deKooning as some of the most famous American artists of the twentieth-century.

Woody Guthrie: This Land is Your Land

"The Project was terribly important. It gave us enough to live on and we could paint what we wanted. It was terrific largely because of its director, Burgoyne Diller. I had to resign after a year because I was an alien, but even in that short time, I changed my attitude toward being an artist. Instead of doing odd jobs and painting on the side, I painted and did odd jobs on the side. My life was the same, but I had a different view of it. I gave up the idea of first making a fortune and then painting in my old age."