WPA Meets IUP : A Glimpse Into America's Artistic Past: The Art: Landscape

Cows on a Hillside by Milton Avery 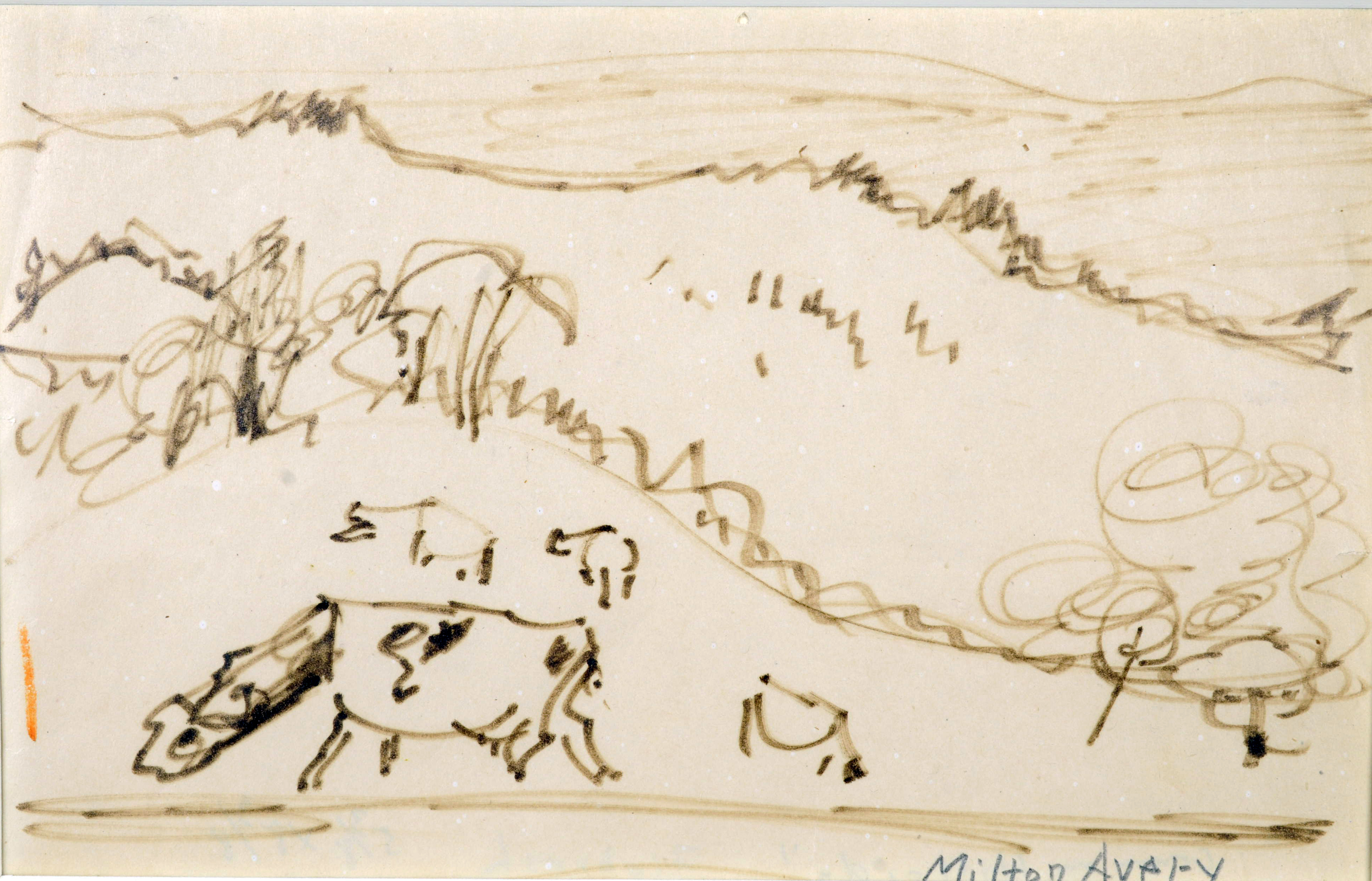 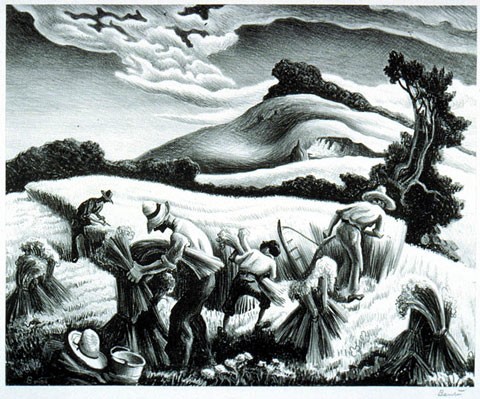 Art is not life, nor a reproduction of life, but a representation carried out within the specific terms, conversions and limitations of the particular art used. Hence, absolute truth, with reference to objective fact, is not to be found in the business. The most realistic art is considerably removed from reality. Art does not give real things or imitations of real things. The thing that art gives is strained first through the artist's selections and judgments, and then through the specific techniques which he used to present them. If you are to enjoy an art, you must first accept its terms. 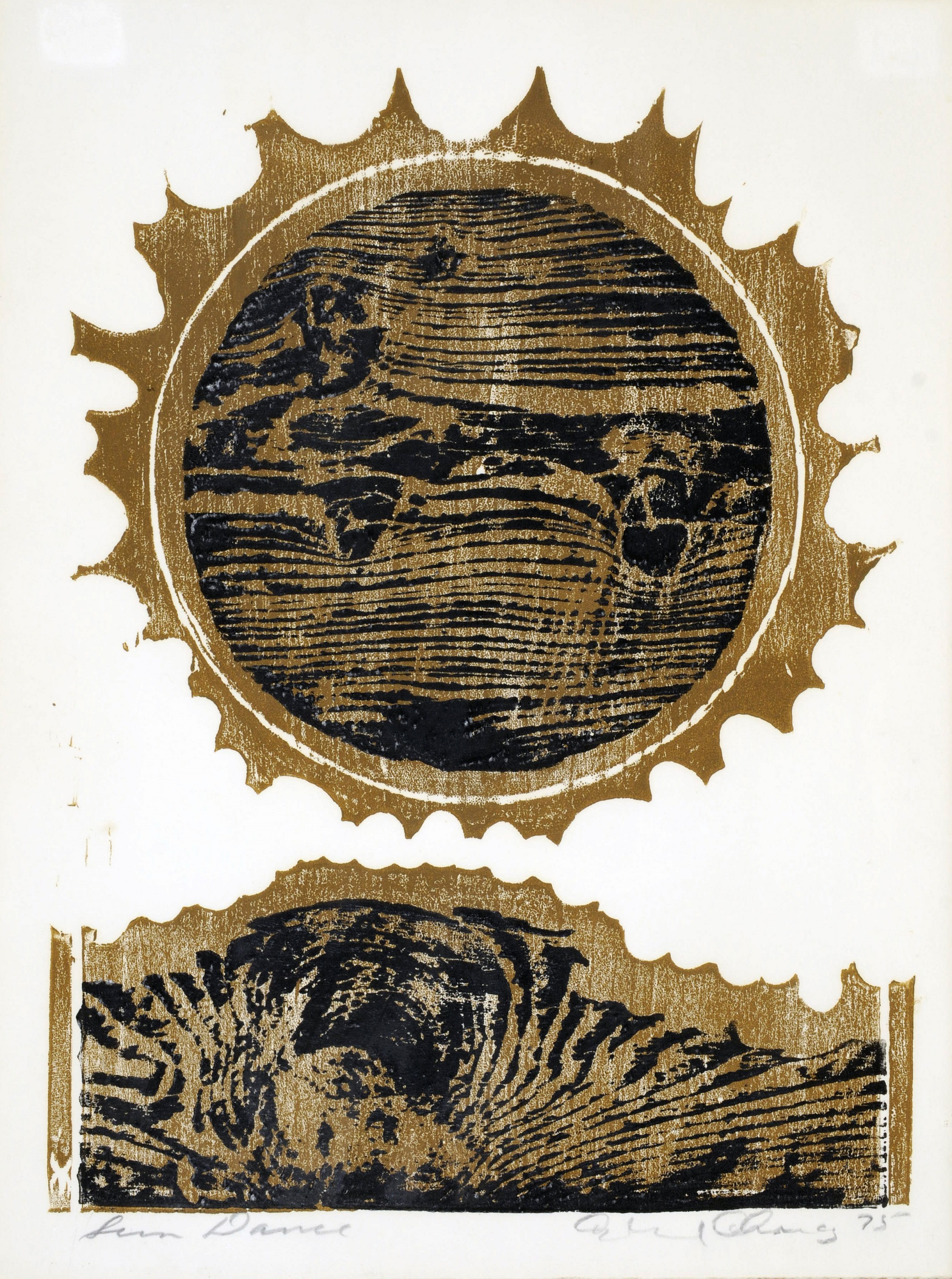 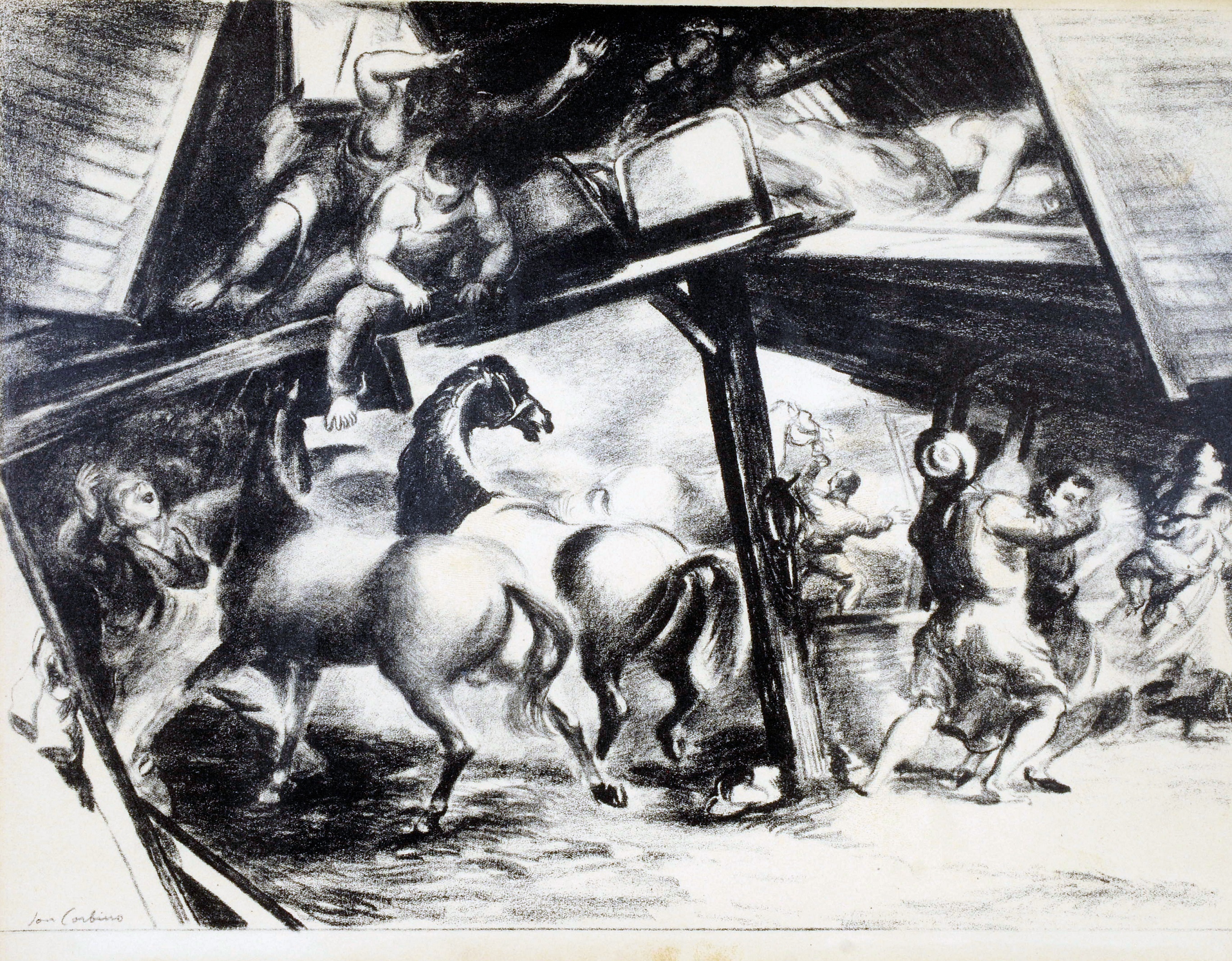 In 1966, a critic for the Chicago American wrote of a Corbino retrospective exhibition: "he painted people of the world-people on the beach, in the sun, in the moonlight. But he graced them with spirit, life, and movement that transcend the everyday."

Title: Cows on a Hillside

Milton Avery used very little color in his work, Cows on a Hillside.  The work is an abstract sketch done in a dark ink on paper.  While it may not be detailed or glamorous, Avery’s sketch clearly uses diminution and atmospheric perspective.  He struck a bold series of ground lines across the bottom of the page, and the horizon line nearly at the top of the page. He placed the main subject, the large Holstein cow, off center.  The largest cow is clearly the focal point with the most color saturation, which Avery sketched in the foreground.  Several other cows are in the background with much less definition and detail.  Abstractions of trees and brush find a place upon the receding hillside behind the cattle.  Avery demonstrated the use of atmospheric perspective in the furthest hillsides, which grow dimmer as they recede.  It is obvious that Avery was an onlooker at a rural farm scene, likely as he was passing by on the roadside.  Judging by the mediums used, it is not out of the question to say that Avery was likely unprepared to do much artwork at the time of this sketch, and used whatever resources he happened to be travelling with.  Avery once described his intentions as an artist, saying, “I try to construct a picture in which shapes, spaces, and colors form a set of unique relationships, independent of any subject matter. At the same time, I try to capture and translate the excitement and emotion aroused in me by the impact with the original idea.”

Avery captured a fleeting glimpse at the livelihood of rural 1940s Americans at a time when farming was hardly a prosperous lifestyle.  The recently-ended depression heavily influenced Avery, who was still interested in portraying the everyday lifestyle of rural Americans.  This comes as no surprise since Avery had been a part of the then recent FAP. As part of President FDR’s New Deal, the government-funded Federal Art Project of the WPA hired thousands of talented artists who created nearly 200,000 paintings, murals, and sculptures.  The project was discontinued, and the artists laid off in 1943.  Avery continued painting and drawing until he died in 1965.

Thomas Hart Benton's Cradling Wheat, 1938, reflects the culture of America's Midwest during the Great Depression.  Although more modern techniques of harvesting wheat were in use around the country at the time, Benton depicted the farmers using old-fashioned manual practices. Anonymous figures bent in labor stand in the forefront of a winding, sloped landscape.  Brimmed hats and shadows hide their faces. This black and white lithograph exudes a more ominous tone than Benton’s painting of the same subject, now in the collection of the Saint Louis Art Museum. While the proportions of the figures juxtaposed against the landscape are not distorted in size, the seemingly rolling background with the bodies bent and flowing with the land seems unnatural.  Rhythm plays a major role in the piece, and the unity of figures and their space reveals the close relationship between the people and their work.  The curves of the tools even follow the wild curvature of the hills, trees, and wheat.

Sun Dance is a woodcut print created in 1975, with black and brown ink. There is also white in the negative space that is the color of the paper. The sun would appear to be the focal point because it is large and centered.  Having white paper and black/brown ink creates contrast throughout the print. Since woodcuts can only be done in one color at a time Chavez must have cut two separate wood blocks, one black and one brown, and then applied one on top of another. Woodcuts create a distinctive texture including chatter marks that resemble wood grain. The marks are mostly completely horizontal in the sun and start to angle a bit in the landscape portion, which creates movement for the eyes.  We can clearly recognize the sun but the landscape underneath is more open to interpretation. It appears to either be water or land depending on how one looks at it. This work resembles some images by Max Ernst, a German Surrealist painter, sculptor, graphic artist, such as Red Forest and The Entire City

Another artist one could see a connection with for this piece is Katsushika Hokusai, who is famously known for his Japanese woodblock prints. Although Hokusai’s print work appears much more advanced and colorful that Chavez’s, it may have inspired Chavez. Edward Chavez was born in New Mexico, a landscape of mountains, high plains and desert, which influenced his art and this piece in particular. Sun Dance especially is a reminder of the natural beauty found in the New Mexico landscape because of the large sun found in the center, representative of a desert.

Jon Corbino’s piece has many aesthetics worth noting in his lithograph. In the lithograph, a scene of chaos emerged from three horses breaking free and are on the loose. The first horse is under reigns while the other two continue to maze through the pillars collapsing. Within the work itself, you can depict a bed frame sliding away from the top floor of this building. Along with the furniture, there are several people sliding from the fall of the building.

On a compositional stand point, the building follows the proper mathematical ratios, the Golden ratio, and has created several layers in the scenery. There is a subtle background, with most of the action taking place in the mid-ground of the lithograph. There is a consistency in shapes the artist used throughout the piece as well as a lack of detail in the character’s faces. There is a consistency is his work with horses.

Jon Corbino’s history with the Works Progress Administration stemmed from his creations of beach paintings exhibited Long Beach, New York. He was contacted to help select artists for the Federal Works Agency and became the assistant chief of Painting and Sculpture under the agency. At this point in time, he helped provide jobs for working artists and created a new way for developing artists to find work and sustain a living. While working for the agency, he focused on paintings of culture found in the Midwest; such as earthquakes, farm culture, and other noteworthy events.